It seems like SJCAM does not sleep at all. Only recently, I reviewed the SJ6 Legend that was only recently released. They have now released yet another action camera, the SJCAM SJ7 Star! It is their new flag ship action camera that is better in every way. You might remember how the SJ6 Legend had an interpolated 4K video resolution, as in created from 2K. Well the SJCAM SJ7 Star features the real 4K video resolution. So this is their first 4K action camera ever! An excellent news for people looking for budget cameras.

SJCAM has kept things simple and so the SJ7 Star looks pretty much the same as the SJ6 Legend. For those who don’t know what the SJ6 Legend looks like, it has a rectangular design like most GoPro action cameras. It’s a fantastic design but there are also some changes. For example SJ7 Star doesn’t have a 1″ LCD screen on the front. They do still have a really nice 2″ LCD Touchscreen on the back. It’s super responsive and easy to use.

Another difference is the material. SJ6 Legend was covered with a rubberized plastic material. SJ7 Star is fully made out of aluminium. That also makes the action camera feel super expensive. Not to mention strong. I personally love everything that comes in an aluminium body. So my opinion might be a little bit biased here. The body also comes in three different colors: black, silver and golden rose. The unique material choice will definitely make me consider adding it onto my best action camera list though.

So about the overall setup of the action camera. The front of the SJ7 Star has the nice lens with a 166° field of view, power button, settings button and two LEDs. The back side has just the 2″ LCD Touchscreen I mentioned before. The settings button is used to enter the menu in the touchscreen. Everything else is done from the LCD though. Top of the action camera has only got 1 button – record/capture. Right side has the MicroSD, MiniUSB and MicroHDMI ports. And finally the bottom, which only holds a compartment for the battery. Surprisingly… no threaded tripod hole. Actually really surprised that they haven’t added it.

The SJCAM SJ7 Star package includes a variety of different accessories and mounts. SJCAM has always done that part really well. The only thing I don’t like is that they have removed the threaded tripod hole. It means that I every time I want to place my action camera onto a tripod, I need to use either a waterproof case or the frame. Which is kind of stupid in my opinion. Perhaps the tripod mount got in the way of the hardware inside the action camera.

The SJ7 Star is SJCAM’s first and only action camera that can record in real 4K. Unlike the SJ6 Legend which uses an interpolated version. So this definitely makes the SJ7 Star a desirable option for everyone who’s looking for 4K options. Which is not bad at all. Shooting in 4K provides much more freedom later on when editing videos for example. The Ambarella A12S75 processor let’s you record in 4K resolution at up to 30fps. Besides that, you also have the option to record in Full HD 1080p at up to 120fps! I really like that as I can record slow motion videos at Full HD. For $199, the specs are actually really good. The GoPro Hero5 Black and Sony FDR-X3000 action cameras have the same technical specifications on paper.

Here is a normal video recorded with Full HD 1080p at 60fps. The most basic setting that most of us use all the time. And honestly, the SJ7 Star is the first SJCAM action camera that has the video quality I can approve of. The colors look natural and balanced. Hardly any blur at all. All of the letters in the background are sharp and crisp. I also like how all the footage looks like it is covered with the central focus. Most action cameras usually have the sides of the video somewhat blurry. With SJ7 Star, the entire footage looks the same so that’s also very nice.

Here is a 4K video example recorded at 30fps. Again, the video quality is so good. I need to compare it with the GoPro Hero5 Black and Sony FDR-X3000 because I think it might actually be better. In 4K, there is zero blur. I haven’t seen a footage this sharp and clear in ages. For a $199 action camera, it is definitely the best bang for buck available. If not the best action camera available.

So besides the amazing video quality, there are also some interesting features. First of all, the SJCAM SJ7 Star does come with a digital image stabilization system that works when recording at a resolution up to 1080p. It also has different video modes for when shooting underwater and also Car Mode. The Car Mode turns the SJ7 Star into a dashboard cam. It basically enables movement detection so it starts recording when it sees movement.

Another feature is that you can attach an external microphone to the action camera via a MiniUSB adapter. I know a lot of bands and musicians have been looking for action cameras with this option.

And of course, the action camera also comes with WiFi. SJCAM has a really nice SJCAM ZONE app available for iOS and Android devices. Through the app, you can view live footage, change settings and start recording from far away. So even though you can do all of that from the touchscreen as well, you can still use your smartphone as a remote control. Especially good when you have the camera mounted onto a moving object, such as the exterior of your car.

While I have never been a fan of SJCAM, the SJ7 Star is their first action camera that I really like and approve of. It has fantastic build quality with an aluminium body. There is a large LCD touchscreen. The video quality is spot on fantastic and at least as good as GoPro and Sony flagships, if not better. Yes it doesn’t have a stabilization system that works with 4K, but out of all available action cameras, only Sony has that. So really, for $199 the SJ7 Star is a beyond amazing action camera.

If you are looking for a well price action camera that still has amazing quality, then get the SJCAM SJ7 Star. It’s definitely the best action camera available for under $200.

Rs.199
We will be happy to hear your thoughts 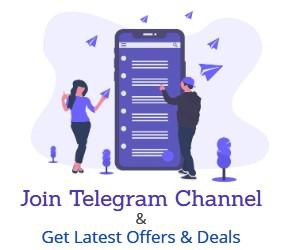 Dealscue is a part of Bigtricks.in.we Offer latest loot deals, Coupons, Products, and sales for you. We update Site throughout the day.everyday with the help of BIGTRICKS team and Contributors like you. You can Join and Post Latest deals and earn gift vouchers through us Visit here for more details.we are here for 365 days to ensure you will never miss any deal or offer ever. You can Subscribe our mailing list, push notifications and Telegram Channel to avoid from offers getting expired

GET THE BEST DEALS IN YOUR INBOX

Recent Deals
Disclosure
Dealscue Loot Deals Contains Affiliate Links so We get Commission for every Sale from the Site.
Follow Us
Download App